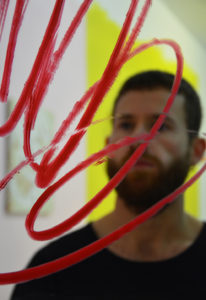 Francesco Gioacchini (Loreto, Italy, 1985) is a visual artist based in Berlin. He works mainly with painting and installation, investigating the aspects related to ambivalence and duality of human condition.

Moving from representation to language, Francesco Gioacchini studies that part of reality which seems to be undefined and unspeakable.

He graduated in 2011 with a degree in Publishing Communication from the University of Macerata, Italy. Prior to graduation he studied one year at the Ramón Llull University in Barcelona, Spain from 2008 through 2009. Branching out and acting on his interest in fine arts, Francesco participated in a summer program related to Life Painting at the Slade School of Fine Art in London.

He then worked on The Floating Piers, art installation made by Christo at Iseo Lake near Brescia, Italy. In 2018 Francesco graduated for a second time, obtaining a master’s degree in Painting with honors from the Academy of Fine Arts of Macerata. Part of his thesis, entitled Glenn Ligon. Border Thoughts, has been published in the art e-book series Critical Grounds hosted on website arshake.com.

Since 2015 he has been participating in several group exhibitions and in 2018 he presented his first solo show in Macerata entitled Francesco Gioacchini. Missing Days. His works and his name have been published in various catalogues, art magazines and art websites such as Arte, Juliet art magazine, exibart.com and rivistasegno.eu.